Thrilling gameplay and frenetic commentators, sold-out stadiums and passionate fans - League of Legends is its own world that exists far away from football. Nevertheless, “LoL” has millions of fans all around the globe. In the European League of Legends Championship Series - the highest European division - S04’s esports team pit themselves against the best players from around Europe.

League of Legends is a competitive strategy game with two teams of five players competing against each other. Regular changes and updates require a high degree of flexibility from the esports professionals. In addition to the appropriate tactics, speed of reaction, coordination and anticipation are decisive. League of Legends is being developed by Riot Games. The title fascinates over 100 million players a month worldwide. Since 2017, the number of viewers has tripled. A clear exclamation point for the steadily growing popularity that League of Legends will continue to enjoy in the future.

Just two years after their entry into esports, the miners in the highest European league made themselves speeches and delivered an impressive fight in the final of the European League of Legends Championship Series 2018. A remarkable feat of the Royal Blues, which in the end did not make it to victory, but earned the squires worldwide sympathy and recognition – even beyond the borders of the Esports. Around 12,000 spectators saw the final of the playoffs in the Palacio Vistalegre in Spain’s capital, Madrid, about half a million people watched the match live in the stream.

With the following season, Riot Games turned the league into a franchise and gave the League of Legends competition a new identity: ten teams make up the League of Legends European Championship (LEC) now. Including the Royal Blues, which have not only recommended themselves with a very successful game series and an extensive application: The sustainable use of squires who are tirelessly involved in the esport, was well received.

In the 2020 LEC season, the League of Legends team of the Royal Blues once again attracted positive attention – with the biggest race to catch up in the history of the LEC. With the #S04MiracleRun, which went viral on social networks, the blue-whites achieved something incredible. Although Schalke won only one of the first eleven matches in the LEC regular season, thanks to a subsequent winning streak they still reached the playoffs and qualified for the World Championships in China for almost the first time. “Even if we just missed qualifying for the World Cup: With the ‘MiracleRun’ we have achieved something that has never existed in the LEC before and will probably not happen again anytime soon,” said Schalke’s Chief Gaming Officer Tim Reichert: “Our team has reached the hearts of the fans. This also shows an unprecedented growth on our social media channels. “

In the LEC, the ten best teams in Europe come up against one another. The season starts with the Spring Split, a format that can be compared to the football Bundesliga – on weekly matchdays, the teams clash in games that include a first and second leg. After the regular season, the six best teams advance to the play-offs. The winner then qualifies for the “Worlds” – the World Championship that takes place every year. In 2017 for example, it was held at the Beijing National Stadium in front of around 80,000 spectators, and over 60 million people followed live stream on the internet. In June, the Summer Split then starts, which runs until August and doesn’t involve any play-offs. The winner of the Summer Split also qualifies for the World Championships.

The League of Legends Euorpean Championship is played in the Berlin studios of Riot Games. On-site spectators cheer loudly at the teams. The streaming platform Twitch broadcasts the games live on the Internet. The matches of Royal Blue are followed weekly by an average of about 250,000 people from all over Europe. The team of FC Schalke 04 Esports proudly represents the blue and white of the traditional club from the heart of the Ruhr area. 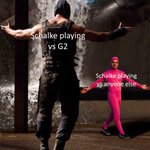 A classic Schalke start to the #LEC Split

RT @BrokenBlade: rough game. next week is ours
Unfortunately, this Tweet was unprofessional and out-of-line with what we stand for. The person responsible no long…

The royal blue League of Legends pros achieved a strong fourth place in their first ever play-off participation in a Spring Split. After an impressive win against Fnatic, Schalke was beaten 1-3 by title co-favourite Rogue.

The royal blue League of Legends team did it again! After the sensational Miracle Run last season, Schalke moved into the playoffs of the League of Legends European Championship (LEC) in the Spring Split 2021. With three wins in a row, S04 Esports even climbed to fourth place in the final week of the group phase.

LEC: S04 Esports with the next perfect week

Our League of Legends professional team continued its winning streak impressively and after four successes in the LEC is tied with G2 Esports in second place. Even front runner Rogue had to admit defeat against the Royal Blues.